The Analog Session history starts in February 2009,when Alexander Robotnick and Ludus Pinsky put together their personal analog synths to organise and perform an Analog Session. The idea was to recreate the purely analog sound of the 70s and early 80s, which the two artists consider being the true “electronic sound”.
The Session lasted 5 days , 3 of which to set up and connect pieces of equipment and to fix sync problems and VAM malfunctioning.
TRACKS
7 tracks were recorded, mainly developed on improvisation.
There were 2 and sometimes 3 sequencer lines written in Midi driving 3 Midi/Cugate convertors.
Improvisation consisted in controlling the sound of the synths and playing Logan , Wasp, and JX3P.
VIDEO
The entire session was recorded in real-time by two cam-coders so that every sound event is documented by the video. 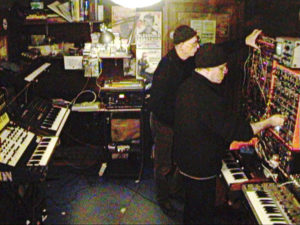 RECORDING
The session was recorded on 10 audio channels
EDITING
Being all tracks mainly based on improvisation, the artists didn’t pay much attention to the their individual duration .
In the end the sessions selected for every track were more than 15 minutes long each. The less significant parts were therefore cut out both from the audio session and its video recording so that the video was still in real-time.
The video was shot by 2 static cameras ; a few shots of individual pieces of equipemnt were added in the editing but it’s essentially the real-time recording of the Analog Session.
MIXING
Tracks were mainly processed by analog outboards , such as tape-echo and vintage effect boxes.
No further track was added to the originals recorded. 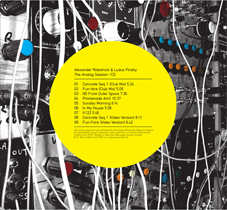 Alexander Robotnick VS Ludus Pinsky : The Analog Session (This is Music LTD)

The Analog Session history continues with the second album:

In April 2012 Alexander Robotnick and Ludus Pinsky deliver their album ‘April‘ as The Analog Session. A journey into electronic music, from the early 70s to modern techno, performed only with vintage analogue synths.
For many club based electronic music concerts (with the exception of academic or experimental concerts) essentially consist of a couple of artists, usually DJs, fiddling on their laptops, rhythmically nodding their heads along for the duration of the “concert”.
“We don’t know whether such a situation may be called ’live’ but to us a concert is something different. As we are talking about electronic music, obviously most of the music played is ‘sequenced’. This however does not prevent the artist from interacting with it by physically playing different parts and improvising.”
The Analog Session’s natural vocation is the live performance and it was indeed conceived as a live improvisation of electronic music. What The Analog Session bring you is a real ‘vintage synth’ experience with a unique sound that cannot be imitated by any other instruments. Every time they perform live they create a different sound environment all based on interaction with sequences of written notes, modifying their timbre and dynamics whilst playing ad-libed flourishes on keyboard synthesizers as a jazz player would.
“We decided to use vintage synths, mainly dating back to the 70s. Their sound is still unique and cannot be imitated by hybrid synths or by digital synths and even less so by software synths. Such ‘vintage synths’ are still used at many professional studios by electronic music producers; but it is quite rare to see them on stage because of the many technical problems they present: they are very fragile, unstable in tuning and most of all it is impossible to record the timbre and recall it at each track.”
This was the spirit of early synth pop music back in the 70s of which both Alexander Robotnick and Ludus Pinsky have vivid memories from their first entry into the world of electronic music. However, the project does not intend to imitate such bands as Tangerine Dream. Forty years have passed, techno music evolved considerably and both protagonists have been developing long artistic careers gaining vast know-how and skills. It is not so much the 70s music they wish to retrieve but rather its “progressive” spirit as well as the ability to improvise, which has become more and more marginalised in the present music scene dominated by computers.
The new album tracks range from electro-disco to techno, opening up to melody and chord arrangements throughout. From the opening, rolling funk of ‘Ascension’ to the electro shimmer of ‘Effai’ and the tougher edged groove of ‘New Mandarins’ The Analog Session show us there’s still new life left in those old machines. The Remixes:
Shortly after the release of “April” The Analog Session is ready for another go with 2 remixed tracks from its latest album.
In “Effai(Late Night RMX)” and “Ascension (Late Night RMX)”Alexander Robotnick & Ludus Pinsky re-interpret in Tech-house style the material recorded in the improvisation sessions that led to the making of the album. The result is a powerful groove, minimal but extremely warm because it’s analog and made more pouncing to hit the dance-floor.
This new release by The Analog Session is another step into the artists’ exploration of analogue electronics of the 70s and early 80s proving that analogue sounds indeed better not only in “space music” but also in contemporary techno. 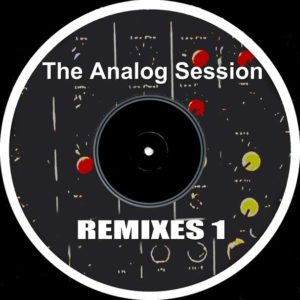 Second single of the Remixes by The Analog Session Collection.
Alexander Robotnick and Ludus Pinsky remix two of the band’s best known tracks:
1) N5 From Outer Space
2) Funfare
The 2 tracks were included in the box (CD-DVD) released in 2010 by This is Music Ltd.
N.5 From Outer Space is slowed down from 128 BPM to 121 BPM to match the present trend in Techno, while Funfare remains in its original 124 BPM.
Remixed in a dance-oriented mood they still preserve the improvisation feeling that characterizes the band. All sounds are strictly analogue. 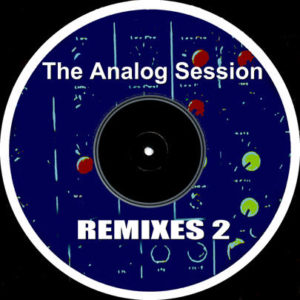 Black Ground (Hot Elephant Music)
‘Black Ground‘ is a journey into electronic music, from the early 70s to modern techno, performed only with vintage analogue synths.
Wires, cables, knobs, keyboards: they are still a vital part of The Analog Session’s improvised world. But as opposed to 2013’s “April” album, “Black Ground” is more dance orientated in its vision. Although most of the tracks originate from improvisation, there¿s more editing work on their individual parts so that they sound more structured and danceable than usual.
The new album tracks range from electro-disco to techno, opening up to melody and chord arrangements
throughout. “My Dream” for instance is an introspective theme that is developed throughdifferent arrangements,
alternating with an almost electro-house rhythm. “Lonely Dancers” is made up by a sequence of synth notes whose sound transforms and becomes the backbone of a track that could be perhaps be seen as `minimal-electro whilst “We Are Here” has a style that’s more difficult to define. As in “My Dream”, here too a dream-like theme
disrupts the minimal atmosphere that provides the tracks structure.
“Space Circle” is built on an harmonic progression of four chords, repeated throughout the track whilst undergoing. continuous variations – inversions and substitutions – where the tone-colour of the analog synths fully capture
the alternating soundscape. “Shure I Like” injects an element of 80s synth pop with its infectious melody providing a link to the duo¿s long-estbalished past but “Wild Electrons” takes us further into future-space as the duo explore the sound potential of the latest (polyphonic) synth assembled by Ludus Pinsky.
Finally “Black Ground”, the title track, brings us back to planet Earth where the analog sound reveals its concrete, earthly nature. 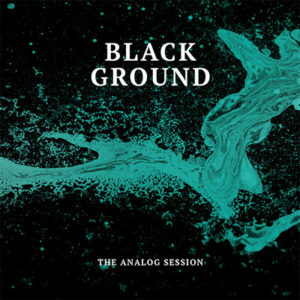 Early Morning Raga is a single released by Hot Elephant Music in May 2018.
With this track, the two artists tackle a style which , just like Jazz, is considered the most profound
and refined expression of melodic improvisation in music: Indian Raga.
Robotnick and Pinsky never claimed to compare with Indian classical music Masters who
traditionally spend up to 10 years studying and practicing before playing in front of an audience.
Anyway, drawing on their long experience with modal improvisation, they decided to pay tribute to
a music style which is only superficially known to the Western public.

It’s the latest work by The Analog Session: